You know who you are.  You’re encrusted in white salt, and you could wring out your jersey after an intense ride or run while others seem to barely need a shower.  You simply seem to sweat during training significantly more than your friends. You know you need more sodium while training, especially with summer heat approaching, but it can be difficult to stay on top of it hour after hour.  You need a nice little sodium head-start.  Well, it just so happens that this week’s Apex Healthy Fuel Recipe is for you…

Instructions: Mix all ingredients well and drink 1-2 hours before a ride.  This drink will provide a 600 mg sodium pre-load.

As the weather heats up, we all know sodium and electrolytes become more and more important on the bike, trail, road, or climb.  Quite simply, you lose them through sweat, respiration, and urine.  Quite simply, you need them for fluid absorption, cellular function, brain function, and muscle function.  In fact, when you hear of “over-hydration,” it’s typically due to too much fluid without adequate electrolytes, not just too much fluid.

A remedy? The sodium pre-load.

I’m all for fueling proactively, and sodium’s no exception.  It takes time for your body to metabolize and use most nutrients  you consume including sodium.  And, they are not “used up” immediately, but are integrated as needed into the blood plasma and cells to promote electrolyte balance.

When you pre-load with sodium, you do two things proactively:

1)       You reduce your risk of going too low in sodium while on the bike, especially the first 60-90 minutes.  There is good evidence in studies that a high-sodium pre-load adequately supplies the body with enough sodium to maintain balance, even in very hot conditions and intense training, for this amount of time.  However, the pre-load in the studies was very high, at more than a teaspoon of salt in intervals beginning 2 hours beforehand.  And, the cyclists did NOT use sodium on the bike nor did they ride for longer than 90 minutes.  So, I hypothesize that a good pre-load start of sodium of ¼ tsp salt PLUS sodium on the bike (aim for 400-700 mg sodium per hour) is a great way to get a jump-start on sodium needs AND maintain balance in hot conditions even for longer than 90 minutes.

2)      Sodium in the blood stream increases blood volume.  It has what’s called an oncotic pressure, or a pressure that draws fluid to it.  If this extra fluid is useful in the body (such as when you begin losing huge amounts in sweat), it’s very beneficial to start out with more.  If it is not useful, it will flood into non-plasma, non-cellular space between tissues (known as 3rd-spacing) and cause swelling.  This is the fluid retention you experience after eating high-sodium foods all weekend.  Chronic overeating of sodium can also cause elevated blood pressure in some, as this oncotic pressure increases and stays at an increased level within an artery that can only stretch so much.  This is not the case during moderate or high intensity training and sweating.

Who should pre-load with sodium?

I believe it can be useful to most all outdoor athletes during the summer months.  However, it is especially useful to those who seem to sweat more than others (for any reason), whose skin is usually covered in salt after riding, and who have experience low sodium and bonking on previous rides.

But again, this is not a recipe to be used when you’re not training.

Although I believe some sodium, from natural healthy sources (like sea salt) is fine in everyday nutrition, it shouldn’t be taken overboard and used within drinks unless you are actively sweating or need to replenish electrolytes for whatever reason.  Not only may it contribute to elevated blood pressure, but it can also increase your sodium needs on the bike.  That’s right.  You cannot chronically pre-load.  This can increase your threshold needs for sodium and put you in a hole on your ride.  So, sodium pre-load right before your ride and with care.

Recently, we discussed the emerging research on beets and their effects on oxygen use and delivery to the muscles.  Why not go ahead and add some beets to this mix?  Either mix 8 oz. Pre-load lemonade w/ 8 oz. beet juice (still using full amount of sodium) OR add 2-3 tsp freeze-dried beet root powder to the recipe as written above.  Extra sodium and nitrates.  Really, you can’t beet it. 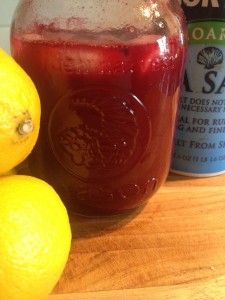 This week, get a jump-start on your sodium and fluid needs, especially if you feel like you sweat more than most.  When you stay “ahead” with fueling, you can train confidently and finish strong.

Optional button
Sign Up for a 6-Week Nutrition Bootcamp